Item is now in cart

Founded in 1984, Nuprint Technologies out of Derry Londonderry, Northern Ireland began as a specialist supplier of labels to the clothing industry and effortlessly met the high standards of M&S, Fruit of the Loom, Burberry, Thomas, Pink and Harrods, among others.

Working in many more industries, the company has since become one of the most respected and innovative label printers in Ireland.

NuPrint have seen a spike in business and product quality since installing an FA-4* flexo press from Nilpeter in November 2015. Read more below about the challenges they were facing, how and why they chose this solution, and last but not least, the results they’ve seen since adding to their product portfolio. 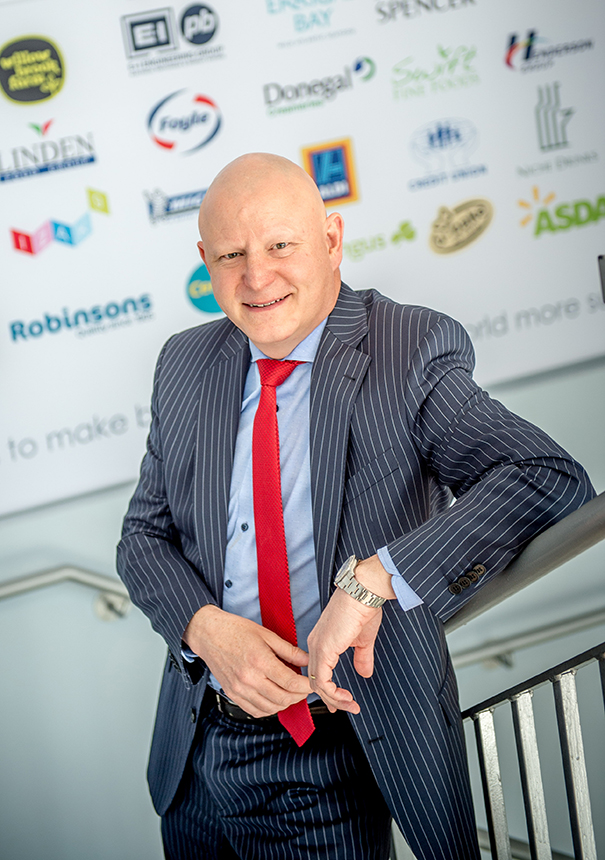 “Simply put, we had come to the stage where we were running at capacity with our existing production equipment,” Gavin Killeen, MD and owner, says on the topic of what made NuPrint Technologies Ltd. consider investing in new equipment. “We wanted to improve the quality of our existing product portfolio – mainly labels for the food & beverage sector, but also expand and meet a growing number of customer requests for flexible packaging products,” he continues.

Originally a recognised supplier of printed fabric labels for the clothing industry in the UK and Ireland, NuPrint Technologies have since established themselves in the market for self-adhesive labels for the food, drink, and beverage sectors. In order to break into these sectors, major investment – totalling around £1.2 million by the end of 2006/2007 – was made in new equipment, the re-training and continued development of staff as well as raising the brand profile.

After recognising a need for new equipment, Nuprint Technologies spent the next 18 months scouring the market place, and considered going digital, before being introduced to Nilpeter’s FA-4* at LabelExpo Americas 2014 in Chicago.

“We were intrigued by the technology on offer, the ease-of-use, and thought it would fit in nicely with our modern print shop. I think we spent around 6 months comparing the numbers, asking a ton of questions, and there was no doubt - the FA-4* and a close partnership with Nilpeter was indeed the right solution for us,” Gavin Killeen says.

The new FA-4* 8-colour full UV-press was installed at NuPrintTechnologies in November 2015. In addition to the ergonomic design, short web path and fast job changes, NuPrint’s FA-4* is equipped with value-adding units for screen, cold foil, and cross-over printing. Another thing that really stood out to NuPrint and Gavin Killeen, was the Nilpeter PowerLink system and the Air Control Satellite, which is basically a pad or tablet that offers a mirror image of the main control board for easy, mobile press operation and job prep.

“The new press gives us a lot of opportunities. For starters, the quality of the labels is just remarkable, which has opened doors in niche markets as well as the high-end food and beverage sectors,” Gavin Killeen adds, “and now we’re able to produce flexible sleeve packaging, flow packs, and more – really adding to our product portfolio,” he continues.

Another decisive factor in choosing the FA-4* was the testing at Nilpeter’s Technology Center in Denmark, as well as recommendations from existing Nilpeter customers. “The help and support from Nilpeter was tremendous. Every question we had was answered in the Technology Center, and we also got to visit five different companies in Denmark to see the FA-4* in action, which was great,” Gavin Killeen concludes.

According to Gavin Killeen, the level of help and support from Nilpeter has continued throughout the 12 months passed since the installation, but adds that NuPrint Technologies haven’t had much need for Customer Care to this stage. “The press has been running smoothly ever since, and the minor issues we’ve faced were solved very quickly,” he says.

As previously stated, NuPrint Technologies have been able to produce and deliver labels at higher standards than previously, with quick response and a higher turnaround. The opportunities from flexible packaging have also improved business in Northern Ireland. “Indeed – we’ve been able to take quite a few added orders from existing clients as well as gained new business from the addition of flexible packaging to our product portfolio,” Gavin Killeen adds.

As a result of the added possibilities and new business, NuPrintTechnologies are now looking to the future. “The market is moving in that direction, and I can definitely see us adding more flexible packaging products in the future, like in-mould labels, lidding film, etc.”, Gavin Killeen continues, “and I foresee a very long-term relationship with Nilpeter in that sense, as the partnership to this point has been extremely rewarding. I look forward to the next step,” he concludes.

"The quality of labels, sleeves, and flow packs from our FA-4* is remarkable, Ask any of our clients!

Our Partnership with Nilpeter has already been very rewarding, and I look foward to the next step."